Each 10ml of N-acetylcysteine for Infusion contains 322.6 mg sodium.

N-acetylcysteine is indicated for the treatment of paracetamol overdose in patients:

a) who have taken a staggered overdose irrespective of plasma paracetamol level. Staggered is defined as an overdose where the paracetamol was ingested over a period of 1 hour or more; or

b) where there is any doubt over the time of the overdose, irrespective of plasma paracetamol level; or

c) who present with a plasma paracetamol level on or above a line joining points of 100mg/L at 4h and 15mg/L at 15h (see below nomogram).

The injection should be administered by intravenous infusion preferably using Glucose 5% as the infusion fluid. Sodium Chloride 0.9% solution may be used if Glucose 5% is not suitable.

The patient should therefore receive a total of 300 mg/kg over a 21 hour period.

Continued treatment with acetylcysteine (given at the dose and rate as used in the third infusion) may be necessary depending on the clinical evaluation of the individual patient. 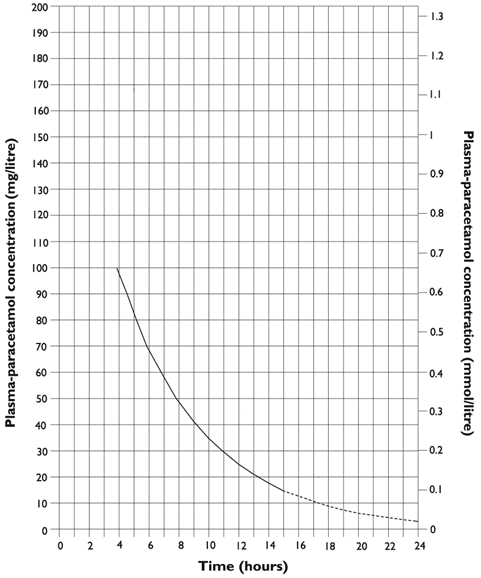 A ceiling weight of 110 kg should be used when calculating the dosage for obese patients.

Dosage should be calculated using the patient's actual weight.

2 Ampoule volume has been rounded up to the nearest whole number.

Children should be treated with the same doses and regimen as adults; however, the quantity of intravenous fluid used should be modified to take into account age and weight, as fluid overload is a potential danger.

N-acetylcysteine should be administered by intravenous infusion preferably using Glucose 5% as the infusion fluid. Sodium Chloride 0.9% solution may be used if Glucose 5% is not suitable.

Doses should be administered using an appropriate infusion pump.

Preparation of the solution

Any unused solution should be disposed of in accordance with local requirements.

Determine the total volume of solution to be infused (infusion fluid + N-acetylcysteine prepared as above) into the child from the table. A separate volume will be required for each of the three infusion periods.

Infuse intravenously according to the weight of the child (see table).

Doses should be administered sequentially with no break between the doses.

There are no contraindications to the treatment of paracetamol overdose with N-acetylcysteine.

Intravenous N-acetylcysteine, given within 24 hours of ingestion of a potentially hepatotoxic overdose of paracetamol, is indicated to prevent or reduce the severity of liver damage. It is most effective when administered within 8 to 10 hours of a paracetamol overdose. Although the efficacy of N-acetylcysteine diminishes between 10 and 24 hours post-overdose, it should be administered up to 24 hours as it can still be of benefit. It may still be administered after 24 hours in patients at risk of severe liver damage.

Use with caution in children, patients requiring fluid restriction or those who weigh less than <40 kg because of the risk of fluid overload which may result in hyponatraemia and seizures which may be life threatening.

Each 10ml of N-acetylcysteine for Infusion contains 322.6mg sodium. To be taken into consideration with patients on a controlled sodium diet.

There are no known interactions.

No information is available on the excretion of the drug into breast milk. Breast-feeding is thus not advised during or immediately following the use of this drug.

There are no known effects on ability to drive and use machines.

The most common adverse reactions reported with N-acetylcysteine are nausea, vomiting, flushing and skin rash.

Adverse reactions to N-acetylcysteine usually occur between 15 and 60 minutes after the start of infusion and, in many cases, symptoms are relieved by stopping the infusion. An antihistamine drug may be necessary, and occasionally corticosteroids may be required. Once an adverse reaction is under control, the infusion can normally be restarted at the lowest infusion rate (100mg/kg in 1 litre over 16 hours).

Case reports of fatalities with N-acetylcysteine have been reported very rarely.

Hypokalaemia and ECG changes have been noted in patients with paracetamol poisoning irrespective of the treatment given. Monitoring of plasma potassium concentration is, therefore, recommended.

If any adverse reactions to N-acetylcysteine develop, advice should be sought from the National Poisons Centre to ensure that the patient receives adequate treatment of the paracetamol overdose.

There is a theoretical risk of hepatic encephalopathy. Overdosage of N-acetylcysteine has been reported to be associated with effects similar to the 'anaphylactoid' reactions noted in section 4.8 (Undesirable Effects), but they may be more severe. General supportive measures should be carried out. Such reactions are managed with antihistamines and steroids in the usual way. There is no specific antidote.

N-acetylcysteine is considered to reduce the hepatic toxicity of NAPQI (n-acetyl-p-benzo-quinoneimine), the highly reactive intermediate metabolite following ingestion of a high dose of paracetamol, by at least two mechanisms. First, N-acetylcysteine acts as a precursor for the synthesis of glutathione and, therefore, maintains cellular glutathione at a level sufficient to inactivate NAPQI. This is thought to be the main mechanism by which N-acetylcysteine acts in the early stages of paracetamol toxicity.

N-acetylcysteine has been shown to still be effective when infusion is started at up to 12 hours after paracetamol ingestion, when most of the analgesic will have been metabolised to its reactive metabolite. At this stage, N-acetylcysteine is thought to act by reducing oxidised thiol groups in key enzymes.

When N-acetylcysteine treatment is begun more than 8 to 10 hours after paracetamol overdose, its efficacy in preventing hepatotoxicity (based on serum indicators) declines progressively with further lengthening of the overdose-treatment interval (the time between paracetamol overdose and start of treatment). However, there is now evidence that it can still be beneficial when given up to 24 hours after overdose. At this late stage of paracetamol hepatotoxicity, N-acetylcysteine's beneficial effects may be due to its ability to improve systematic haemodynamics and oxygen transport, although the mechanism by which this may occur has yet to be determined.

Metabolism appears to be rapid and extensive. There is no information on whether N-acetylcysteine crosses the blood-brain barrier or the placenta, or whether it is excreted in breast milk.

A change in the colour of the solution to light purple has sometimes been noted and is not thought to indicate significant impairment of safety or efficacy.

Once diluted according to directions (see section 4.2), start using within 3 hours.

Do not store above 25° C. Keep container in the outer carton.

Keep out of the sight and reach of children.

10ml Type I clear glass ampoules in packs of 10

Use once only and discard any unused solution at the end of the session in the appropriate manner.