Orladeyo is indicated for routine prevention of recurrent attacks of hereditary angioedema (HAE) in adult and adolescent patients aged 12 years and older.

The recommended dose for adults and adolescents aged 12 years and older weighing ≥ 40 kg is 150 mg berotralstat once daily.

If a dose of berotralstat is missed, the patient should take the forgotten dose as soon as possible without exceeding one dose per day.

Orladeyo is not intended for treatment of acute HAE attacks (see section 4.4).

No dose adjustment is required for patients above 65 years of age (see sections 4.4 and 5.2).

The safety and efficacy of berotralstat in children under 12 years of age have not yet been established. No data are available.

Orladeyo is for oral use. The capsule can be taken at any time of the day, with food (see section 5.2).

Orladeyo is not intended for treatment of acute HAE attacks, individualised treatment should be initiated with an approved rescue medicinal product.

There are no available clinical data on the use of berotralstat in HAE patients with normal C1 esterase inhibitor (C1-INH) activity.

Patients with moderate or severe hepatic impairment may develop increased serum berotralstat concentrations that are associated with a risk of prolonged QT. Use of berotralstat in these patients should be avoided.

Patients with severe renal impairment may be at risk of prolonged QT. It is preferable to avoid the use of berotralstat in these patients. If treatment is required, appropriate monitoring (e.g. ECGs) should be considered.

There are no data available for the use of berotralstat in patients with independent risk factors for QT prolongation such as electrolyte disturbances, known pre-existing QT prolongation (either acquired or familial), advancing age (see section 4.2), or concomitant use of other medicinal products predominantly metabolised by CYP2D6, CYP3A4, or P-gp substrates with a narrow therapeutic index (see section 4.5) or other medicinal products known to prolong the QT (e.g. citalopram, escitalopram, amitriptyline, ondansetron). It is preferable to avoid the use of berotralstat in these patients. If treatment is required, appropriate monitoring (e.g. ECGs) and dose adjustment of these medicinal products should be considered.

Effects of other medicinal products on berotralstat

Effects of berotralstat on other medicinal products

Berotralstat is a moderate inhibitor of CYP3A4, increasing the Cmax and AUC of oral midazolam by 45% and 124%, respectively, and the Cmax and AUC of amlodipine by 45% and 77%, respectively. Concomitant administration may increase concentrations of other medicines that are CYP3A4 substrates. Refer to the SmPC for concomitant medicines that are predominantly metabolised by CYP3A4, particularly those with a narrow therapeutic index (e.g. cyclosporine, fentanyl). Dose adjustments of these medicines may be required (see sections 4.4 and 5.2).

Berotralstat is a moderate inhibitor of CYP2D6, increasing the Cmax and AUC of dextromethorphan by 196% and 177%, respectively, and the Cmax and AUC of desipramine by 64% and 87%, respectively. Concomitant administration may increase exposure of other medicines that are CYP2D6 substrates. Refer to the SmPC for concomitant medicines that are predominantly metabolised by CYP2D6, particularly those with a narrow therapeutic index (e.g. thioridazine, pimozide) or whose prescribing information recommends therapeutic monitoring (e.g. tricyclic antidepressants). Dose adjustments of these medicines may be required (see sections 4.4 and 5.2).

Berotralstat is a weak inhibitor of CYP2C9 increasing the Cmax and AUC of tolbutamide by 19% and 73%, respectively. No dose adjustment is recommended for concomitant use of medicines that are predominantly metabolised by CYP2C9 (e.g. tolbutamide) (see section 5.2).

Berotralstat is not an inhibitor of CYP2C19, as Cmax and AUC of omeprazole were increased by only 21% and 24%, respectively. No dose adjustment is recommended for concomitant use of medicines that are predominantly metabolised by CYP2C19 (e.g. omeprazole) (see section 5.2).

Berotralstat is a weak inhibitor of P-gp and increased the Cmax and AUC of the P-gp substrate digoxin by 58% and 48%, respectively. Refer to the SmPC for concomitant medicines that are P-gp substrates, particularly those with a narrow therapeutic index (e.g. digoxin) or whose prescribing information recommends therapeutic monitoring (e.g. dabigatran). Dose adjustments of these medicines may be required (see sections 4.4 and 5.2).

There are no or limited amount of data from the use of berotralstat in pregnant women. Animal studies are insufficient with respect to reproductive toxicity (see section 5.3).

Berotralstat is not recommended during pregnancy.

A risk to the suckling child cannot be excluded.

No effect on fertility was observed in animal studies (see section 5.3).

Orladeyo has no or negligible influence on the ability to drive and use machines.

a Includes the events of Headache, Sinus headache

The safety of Orladeyo was evaluated in clinical studies in a subgroup of 28 adolescent patients aged 12 to < 18 years of age and weighing at least 40 kg. The safety profile was similar to that observed in adults.

Reporting suspected adverse reactions after authorisation of the medicinal product is important. It allows continued monitoring of the benefit/risk balance of the medicinal product. Healthcare professionals are asked to report any suspected adverse reactions via the Yellow Card Scheme Website: www.mhra.gov.uk/yellowcard or search for MHRA Yellow Card in the Google Play or Apple App Store.

No case of overdose has been reported in clinical studies. There is no available information to identify potential signs and symptoms of overdose. If symptoms should occur, symptomatic treatment is recommended. There is no antidote available.

At the steady state Cmax of berotralstat at the recommended dose of 150 mg once daily, the mean corrected QT interval increased by 3.4 msec (90% upper CI bound of 6.8 msec), which is below the 10 msec threshold for concern. At a supratherapeutic dose of 450 mg once daily, steady state exposures were 4- fold higher than at the recommended 150 mg dose, and the corrected QT interval increased by a mean of 21.9 msec.

This study included 120 patients (114 adults and 6 children 12 years and over) with type I or II HAE who experienced at least two investigator-confirmed attacks within the first 8 weeks of the run-in period and took at least one dose of study treatment. Nine patients were aged ≥ 65 years. Patients were randomised into 1 of 3 parallel treatment arms, stratified by baseline attack rate, in a 1:1:1 ratio (berotralstat 110 mg, berotralstat 150 mg or placebo by oral administration once daily, with food) for the 24-week treatment period.

In berotralstat-treated patients, 51.4% of breakthrough attacks were treated with C1-INH (see section 4.4). Concomitant use of C1-INH and berotralstat did not result in any identifiable adverse reactions.

Orladeyo 150 mg produced a statistically significant and clinically meaningful reduction in the rate of HAE attacks compared to placebo through 24 weeks in the primary endpoint Intent-to-Treat (ITT) population as shown in Table 2.

The percent reduction in HAE attack rate was greater with Orladeyo 150 mg compared to placebo, regardless of attack rate during the run-in period.

a One patient in the ITT analysis was randomised to placebo but was not treated.

Reduction in attack rates was sustained through 24 weeks, as shown in Figure 1. 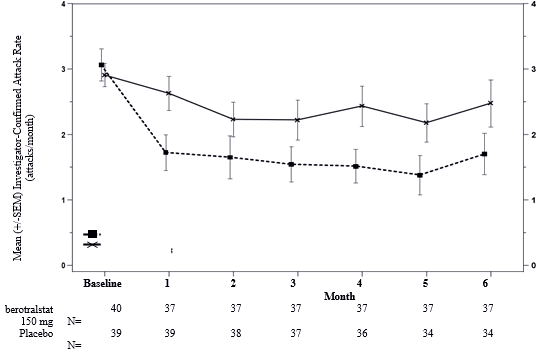 SEM: standard error of the mean

Of patients receiving 150 mg berotralstat, 58% had a ≥ 50% reduction in their HAE attack rates compared to baseline versus 25% of placebo patients.

Patients receiving berotralstat 150 mg experienced an improvement in Angioedema Quality of Life Questionnaire (AE-QoL) total score and domain scores (functioning, fatigue/mood, fear/shame and nutrition) compared to the placebo group as shown in Table 3. A reduction of 6 points is considered a clinically meaningful improvement. The largest improvement was observed in the functioning score.

The safety and effectiveness of Orladeyo were evaluated in 28 adolescent patients aged 12 to < 18 years across both studies. The safety profile and attack rate on study were similar to those observed in adults.

The safety and efficacy of berotralstat in paediatric patients under 12 years have not been established.

Following oral administration of berotralstat 150 mg once daily, Cmax and area under the curve over the dosing interval (AUCtau) are 158 ng/mL (range: 110 to 234 ng/mL) and 2770 ng*h/mL (range: 1880 to 3790 ng*h/mL), respectively. The pharmacokinetics of berotralstat in patients with HAE are similar to those of healthy people.

Berotralstat exposure (Cmax and AUC) increases greater than proportionally with dose and steady state is reached by days 6 to 12.

No differences in the Cmax and AUC of berotralstat were observed following administration with a high-fat meal. However the median tmax was delayed by 3 hours, from 2 hours (fasted) to 5 hours (fed, range: 1 to 8 hours). Berotralstat is to be administered with food to minimise gastrointestinal adverse events.

Plasma protein binding is approximately 99%. After a single dose of radiolabelled berotralstat 300 mg, the blood to plasma ratio was approximately 0.92. At steady state, the geometric mean (%CV) Vd/F was 3123 L (40%) for berotralstat 150 mg once daily.

After a single dose of 150 mg, the median half-life of berotralstat was approximately 93 hours (range: 39 to 152 hours).

Population pharmacokinetic analyses showed that age, gender and race did not meaningfully influence the pharmacokinetics of berotralstat. Body weight was identified as a covariate describing the variability of clearance and volume of distribution, resulting in higher exposure (AUC and Cmax) in patients weighing less. However, this difference is not considered to be clinically relevant and no dose adjustments are recommended for any of these demographics.

Based on population pharmacokinetic analyses that included paediatric patients 12 to < 18 years and weighing at least 40 kg, exposure at steady state following oral administration of berotralstat 150 mg once daily was slightly higher (29% higher) than adult exposure, with an estimated geometric mean (CV%) AUCtau of 2515 (38.6) ng*h/mL. However, this difference is not considered to be clinically relevant, and no dose adjustments are recommended in paediatric patients 12 to < 18 years of age weighing 40 kg or more.

Berotralstat has not been studied in patients above 75 years of age; however, age is not expected to affect exposure to berotralstat.

In non-clinical chronic repeat-dose toxicity studies, phospholipidosis (presence of foamy vacuolated macrophages) was observed in the liver of rats (by electron microscopy) and suspected in the liver, small intestine, lung, spleen and lymphoid tissue in rats and monkeys, at clinically relevant exposures. The clinical relevance of these findings is unknown.

Skeletal myofiber degeneration/necrosis was observed in the 2-year (lifetime) study in rats. Exposure at the no observed adverse effect level (NOAEL) for these findings in rats was 4.5 times the exposure achieved (on an AUC basis) at the clinical 150 mg berotralstat dose.

Non-clinical data reveal no special hazard for humans based on conventional studies of genotoxicity.

There was no increase in tumours in a 6-month study in Tg rasH2 transgenic mice. Exposure in this mouse carcinogenicity study was 10 times the exposure achieved (on an AUC basis) at the clinical 150 mg berotralstat dose.

Rare stromal sarcomas of the endometrium and undifferentiated sarcomas of the skin were found in a 2-year (lifetime) study in rats administered berotralstat at an exposure that was 4.5 times the exposure achieved (on an AUC basis) at the clinical 150 mg berotralstat dose. These findings are inconclusive, with an incidence slightly higher than in control groups. The clinical relevance of these findings is unknown.

Berotralstat was detected in the plasma of rat pups on lactation day 14 at approximately 5% of the maternal plasma concentration.

Berotralstat had no effects on mating or fertility in male and female rats at a dose 2.9 times the clinical 150 mg berotralstat dose on a mg/m2 basis.