MUSE is a sterile, single-use transurethral system for the delivery of alprostadil to the male urethra. Alprostadil is suspended in macrogol and is formed into a urethral stick (1.4 mm in diameter by 3 mm in length) which is contained in the tip of the polypropylene applicator. 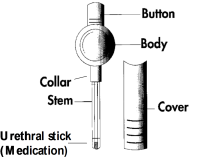 Initiation of therapy: a medical professional should instruct each patient on the correct use of MUSE. The recommended starting dose is 500 micrograms.

Dosage may be increased in a stepwise manner (to 1000 micrograms), or decreased (to 250 or 125 micrograms) under medical supervision until the patient achieves a satisfactory response. After an assessment of the patient's skill and competence with the procedure, the chosen dose may then be prescribed for home use.

MUSE can be used as an adjunct in evaluating penile vascular function using Doppler duplex ultrasonography. It has been shown that a 500 microgram dose of MUSE has a comparable effect on penile arterial dilatation and peak systolic velocity flow to 10 microgram of alprostadil given by intracavernosal injection. At the time of discharge from the clinic, the erection should have subsided.

Use in the elderly

No adjustment for age is required.

MUSE is contraindicated in the following patients:

• Patients who have a known hypersensitivity to the active substance or to any of the excipients.

• Patients with anatomical deformation of the penis, such as stenosis of the distal urethra, severe hypospadias, severe curvature, balanitis, acute or chronic urethritis, angulation, cavernosal fibrosis or Peyronie's disease.

• Patients who have conditions that might predispose them to priapism such as sickle cell anaemia or trait, thrombocythaemia, polycythaemia, multiple myeloma or leukemia; predisposition to venous thrombosis, or a history of recurrent priapism.

• Patients for for whom sexual activity is inadvisable or contraindicated, such as men with unstable cardiovascular or unstable cerebrovascular conditions.

MUSE should not be used if the female partner is or may be pregnant unless the couple uses a condom barrier.

MUSE is contraindicated in women and children.

Underlying treatable medical causes of erectile dysfunction should be diagnosed and treated prior to initiation of treatment with MUSE.

Painful erection is more likely to occur in patients with anatomical deformations of the penis, such as angulation, phimosis, cavernosal fibrosis, Peyronie's disease or plaques.

Incorrect insertion of MUSE may cause urethral abrasion and minor urethral bleeding. In patients infected with blood born diseases, this could increase the transmission of such diseases to their partner.

Patients on anticoagulants or with bleeding disorders may have an increased risk of urethral bleeding.

Priapism (erection lasting over six hours) may occur following administration of MUSE. Treatment of priapism should not be delayed more than 6 hours (please refer to Section 4.9 Overdose). Instruct patients to immediately report to their prescribing physician, or, if unavailable, seek immediate medical assistance for any erection that persists longer than 4 hours. Treatment of priapism should be according to established medical practice.

In clinical trials of MUSE, priapism (rigid erections lasting ≥6 hours) and prolonged erection (rigid erection lasting 4 hours and <6 hours) were reported infrequently (<0.1% and 0.3% of patients, respectively). To minimize the risk, select the lowest effective dose. It may be necessary to reduce the dose or discontinue treatment in any patient who develops priapism.

Peyronie's disease may occur following the administration of MUSE. The occurrence of fibrosis may increase with increased duration of use. Regular follow-up of patients, with careful examination of the penis, is strongly recommended to detect signs of penile fibrosis or Peyronie's disease. Treatment with MUSE should be discontinued in patients who develop penile angulation, cavernosal fibrosis, or Peyronie's disease.

MUSE should be used with caution in patients who have experienced transient ischaemic attacks or those with unstable cardiovascular disorders.

MUSE is not intended for co-administration with any other agent for the treatment of erectile dysfunction (see also 4.5).

The potential for abuse of MUSE should be considered in patients with a history of psychiatric disorder or addiction.

Sexual stimulation and intercourse can lead to cardiac and pulmonary events in patients with coronary heart disease, congestive heart failure or pulmonary disease. These patients when using MUSE should engage in sexual activity with caution.

Patients and their partners should be advised that MUSE offers no protection from transmission of sexually transmitted diseases. They should be counselled about the protective measures that are necessary to guard against the spread of sexually transmitted agents, including the human immunodeficiency virus (HIV). The use of MUSE will not affect the integrity of condoms. Since MUSE may add small amounts of alprostadil to the naturally occurring PGE1 already present in the semen, it is recommended that adequate contraception is used if the woman is of child-bearing potential.

The use of MUSE in patients with penile implants has been reported in a limited number of cases in the literature. However no conclusions can be drawn regarding the safety or efficacy of this combination.

Systemic interactions are unlikely because of the low levels of alprostadil in the peripheral venous circulation, however the presence of medication affecting erectile function may influence the response to MUSE. Decongestants and appetite suppressants may diminish the effect of MUSE. Patients on anticoagulants or with bleeding disorders may have an increased risk of urethral bleeding.

The effects of combinations of alprostadil with other treatments for erectile dysfunction (e.g. sildenafil) or other drugs inducing erection (e.g. papaverine) have not been formally studied. No conclusions can therefore be drawn regarding the safety or efficacy of this combination.

Sympathomimetics may reduce the effect of alprostadil. Alprostadil may enhance the effects of antihypertensives, anticoagulants and platelet aggregation inhibitors.

Insufficient data exists concerning the concomitant use of MUSE with vasoactive medications. There is the potential that this combination may increase the risk of hypotensive symptoms; this effect may be more common in the elderly.

MUSE may add small amounts of alprostadil to the naturally occurring PGE1 already present in the semen. A condom barrier should therefore be used during sexual intercourse if the female partner is pregnant to avoid irritation of the vagina and guard against any risk to the foetus.

Patients should be cautioned to avoid activities, such as driving or hazardous tasks, where injury could result if hypotension or syncope were to occur after MUSE administration. In patients experiencing hypotension and/or syncope, these events have usually occurred during initial titration and within one hour of drug administration.

The most frequently reported adverse effect following treatment with MUSE was pain in the penis. In most cases, pain was assessed as mild or moderate.

Vaginal burning/itching was reported by approximately 6% of partners of patients on active treatment. This may be due to resuming sexual intercourse or due to the use of MUSE.

Overdosage has not been reported with MUSE.

Symptomatic hypotension, persistent penile pain and in rare instances, priapism may occur with alprostadil overdosage. Patients should be kept under medical supervision until systemic or local symptoms have resolved.

Should a prolonged erection lasting 4 or more hours occur, the patient should be advised to seek medical help. The following actions can be taken:

• The patient should be supine or lying on his side. Apply an ice pack alternately for two minutes to each upper inner thigh (this may cause a reflex opening of the venous valves). If there is no response after 10 minutes, discontinue treatment.

• If this treatment is ineffective and a rigid erection has lasted for more than 6 hours, penile aspiration should be performed. Using aseptic technique, insert a 19-21 gauge butterfly needle into the corpus cavernosum and aspirate 20-50 ml of blood. This may detumesce the penis. If necessary, the procedure may be repeated on the opposite side of the penis.

• If still unsuccessful, intracavernous injection of α-adrenergic medication is recommended. Although the usual contraindication to intrapenile administration of a vasoconstrictor does not apply in the treatment of priapism, caution is advised when this option is exercised. Blood pressure and pulse should be continuously monitored during the procedure. Extreme caution is required in patients with coronary heart disease, uncontrolled hypertension, cerebral ischaemia, and in subjects taking monoamine oxidase inhibitors. In the latter case, facilities should be available to manage a hypertensive crisis.

• As an alternative metaraminol may be used, but it should be noted that fatal hypertensive crises have been reported. If this still fails to resolve the priapism, the patient should immediately be referred for surgical management.

Alprostadil is chemically identical to prostaglandin E1, the actions of which include vasodilatation of blood vessels in the erectile tissues of the corpora cavernosa and increase in cavernosal artery blood flow, causing penile rigidity.

Approximately 80% of the alprostadil delivered by MUSE is absorbed through the urethral mucosa within 10 minutes. The half-life is less than 10 minutes and peripheral venous plasma concentrations are low or undetectable. Alprostadil is rapidly metabolised, both locally and in the pulmonary capillary bed; metabolites are excreted in the urine (90% within 24 hours) and the faeces. There is no evidence of tissue retention of alprostadil or its metabolites.

In rats, high doses of prostaglandin E1 increased foetal resorption, presumably due to maternal stress. High concentrations of alprostadil (400 microgram/ml) had no effect on human sperm motility or viability in vitro. In rabbits, there was no foetal damage or effect on reproductive function at the maximum tested intravaginal dose of 4mg.

In the majority of in vitro and in vivo genotoxicity test systems in which alprostadil has been evaluated it produced negative results. These tests include the bacterial reversion test using Salmonella typhimurium, unscheduled DNA synthesis in rat primary hepatocytes, forward mutation assay at the hprt locus in cultured ovary cells from Chinese hamsters, alkaline elution test, sister chromatid exchange assay (all in vitro tests) and the micronucleus test in both mice and rats (in vivo tests). In two other in vitro tests, the mouse lymphoma forward mutation assay and the Chinese hamster ovary chromosomal aberration assay, alprostadil produced borderline positive and positive evidence, respectively, for chromosomal damage. In view of the number of negative in vitro results and the lack of evidence for genotoxicity in two in vivo tests, it is considered that the positive results obtained in these two in vitro tests are of doubtful biological significance. Overall the presently available evidence cannot fully exclude the risk of genotoxic activity in humans.

From a microbiological point of view, the product should be used immediately after opening the foil pouch.

Store at 2°- 8°C (in a refrigerator). Store in the original package.

Unopened pouches may be kept out of the refrigerator by the patient, at a temperature below 30°C, for up to 14 days prior to use.

MUSE is supplied as cartons of 1, 2, 3, 6 or 10 foil pouches, with each pouch containing one delivery system. Not all pack sizes may be marketed.

The pouches are composed of aluminium foil/laminate. The applicators are made from radiation-resistant medical-grade polypropylene.