Solution for injection in a pre-filled pen (auto-injector).

Emerade is indicated for the emergency treatment of severe acute allergic reactions (anaphylaxis) triggered by allergens in foods, medicines, insect stings or bites, and other allergens as well as for exercise-induced or idiopathic anaphylaxis.

The effective dose is usually within the range 5- 10 micrograms per kg bodyweight but higher doses may be necessary in some cases.

A dosage below 150 micrograms cannot be administered with sufficient accuracy in children weighing less than 15 kg and use is therefore not recommended unless during a life-threatening situation and under medical advice.

Children between 15 kg and 30 kg bodyweight

The usual dose is 150 micrograms.

The usual dose is 300 micrograms.

The dosage recommendations for adult patients should be followed.

An initial dose should be administered as soon as symptoms of anaphylaxis are recognised.

Emerade is intended for intramuscular administration of adrenaline.

Emerade should be administered early, at the first signs of anaphylaxis. A poor outcome from anaphylaxis is associated with late administration of adrenaline.

Emerade must be injected in the outer side of the thigh.

The injection can be administered through clothing.

The patient/carer should be informed that following each use of Emerade:

▪ They should call for immediate medical assistance, ask for an ambulance and state 'anaphylaxis' even if symptoms appear to be improving (see section 4.4).

▪ The patient should if possible remain with another person until medical assistance arrives.

▪ It is recommended that the patients are prescribed two Emerade pens which they should carry at all times.

For detailed instruction for use, refer to section 6.6.

There are no absolute contraindications to the use of Emerade in an allergic emergency.

Do not remove the cap until ready for use.

Emerade must be administrated only into the anterolateral thigh.

The injection is delivered immediately after the triggering cylinder is pressed against the skin. Patients should be advised not to inject Emerade into the gluteus maximus due to the risk of accidental injection into a vein.

Emerade should be used in emergency situations as life-sustaining treatment.

The patient must urgently seek medical assistance for further treatment after using Emerade.

All patients who are prescribed Emerade should be thoroughly instructed to understand the indications for the use and the correct method of administration (see section 6.6). It is strongly advised also to educate the patient's immediate associates (e.g. parents, caregivers, teachers) for the correct usage of Emerade in case support is needed in the emergency situation.

The patient/carer should be informed about the possibility of biphasic anaphylaxis which is characterised by initial resolution followed by recurrence of symptoms some hours later.

Patients with concomitant asthma may be at increased risk of a severe anaphylactic reaction.

Use with caution in patients with heart diseases including angina pectoris, cardiac arrhythmia, cor pulmonale, obstructive cardiomyopathy and atherosclerosis. There is also a risk for adverse reactions after the administration of adrenaline to patients with hyperthyroidism, hypertension, phaeochromocytoma, glaucoma, severe renal impairment, prostate adenoma, hypercalcaemia, hypokalaemia, diabetes, and in elderly patients and pregnant women.

Unintentional injection in hands and feet can result in peripheral ischemia that may require treatment.

Patients should be warned regarding related allergens and should be investigated whenever possible so that their specific allergens can be characterised.

Sodium metabisulphite may rarely cause severe hypersensitivity reactions including anaphylaxis and bronchospasm in sensitive individuals particularly in those with a history of asthma. All those patients should be carefully instructed in which circumstances Emerade must be used.

This medicinal product contains less than 1 mmol sodium (23 mg) per dose), that is to say essentially 'sodium-free'.

The hyperglycaemic effect of adrenaline may necessitate an increase in insulin or oral hypoglycaemic treatment in diabetic patients.

There are no adequate or well-controlled studies of adrenaline during pregnancy. Adrenaline should be used in pregnancy only when the potential benefit to the mother outweighs the possible risk to the foetus.

Because of its poor oral bioavailability and short half-life, any adrenaline in breast milk is unlikely to affect the nursing infant.

Emerade has no or negligible influence on the ability to drive and use machines, however, patients are not recommended to drive or use machines following administration of adrenaline, since they will be affected by the anaphylactic reaction.

The following table is based upon experience with the use of adrenaline.

Reporting suspected adverse reactions after authorisation of the medicinal product is important. It allows continued monitoring of the benefit/risk balance of the medicinal product. Healthcare professionals are asked to report any suspected adverse reactions via theYellow Card Scheme; Website: www.mhra.gov.uk/yellowcard or search for MHRA Yellow Card in the Google Play or Apple App Store.

An overdose, or an accidental intravascular injection of adrenaline, can originate a sudden increase in blood pressure that can cause cerebral haemorrhage. Severe pulmonary oedema caused by peripheral vasoconstriction together with cardiac stimulation can result in death. Severe pulmonary oedema with difficulty in breathing can be treated with fast-acting α-blockers. Life-threatening heart arrhythmias can be treated with β-blocking agents.

Adrenaline is the natural active sympathomimetic hormone from the adrenal medulla. It stimulates both the α- and β-adrenergic receptors. Adrenaline is the first choice for emergency treatment of severe allergic reactions and idiopathic or exercised-induced anaphylaxis.

Adrenaline has a potent vasoconstrictive effect through its α-adrenergic stimulation. This effect counteracts the vasodilatation and increased vascular perfusion, leading to low intravascular flow and hypotension, which are the main pharmacotoxicological effects in the anaphylactic shock.

By stimulating β-receptors in the lungs, adrenaline produces a potent bronchodilator effect with relief of wheezing and dyspnea. Adrenaline also relieves pruritus, urticaria and angioedema associated to anaphylaxis.

Circulating adrenaline is metabolized in the liver and other tissues by the enzymes COMT and MAO. Inactive metabolites are excreted in the urine.

The half-life of adrenaline in plasma is about 2 to 3 minutes. However, when adrenaline is injected subcutaneously or intramuscularly the absorption is retarded by local vasoconstriction and thus the effects can last longer than as predicted by half-life. Massage around the injection site is advised to accelerate absorption.

Due to the high variability of adrenaline plasma concentration observed in the conducted PK/PD studies, robust conclusions cannot be drawn.

Adrenaline bioavailability in healthy subjects who have well perfused subcutaneous tissue cannot necessarily be extrapolated to patients in established anaphylactic shock in whom there may be peripheral circulatory shutdown. This underlines the importance of early administration of adrenaline at the first signs of anaphylaxis, while the superficial tissues are still well perfused, in order to maximise adrenaline uptake into the systemic circulation.

Adrenaline has been extensively used in the emergency treatment of severe allergic reactions for many years. There is no further preclinical data relevant for prescribers besides those already described in this SmPC.

Hydrochloric acid (for adjustment of pH)

Store in the original outer carton, however while carrying by patient/carer it is acceptable to store in the specially designed, plastic case provided. The pen must always be kept in this case to ensure it is protected.

Emerade consists of a pre-filled syringe made of glass with a polyisoprene rubber needle plunger in an auto-injector. Emerade is latex free.

Emerade has an outer carton as well as a plastic box to store the auto-injector in.

It is very important that the patient receives detailed information on how to use Emerade.

For single use only.

The expiry date is indicated on the label and on the outer carton and Emerade should not be used after this date.

Discard and replace the auto-injector after expiry date.

Check the solution periodically through the inspection window of the unit by lifting the label to make sure the solution is clear and colourless. Discard and replace Emerade if the solution is discoloured or contains particles.

Emerade should always be carried if at risk of anaphylaxis.

The instructions for use must be carefully followed in order to avoid accidental injection.

It is recommended that your family members, carers or teachers are also instructed in the correct use of Emerade.

Emerade is designed for easy use and has to be considered as a first aid. Emerade should be administered early, at the first signs of anaphylaxis. Emerade is intended for intramuscular administration of adrenaline. Emerade must be injected in the outer side of the thigh and the injection occurs when the triggering cylinder is firmly pressed into the thigh. The injection can be administered through clothing. Massaging around the injection area accelerates absorption.

Emerade has an opening only at the needle end and none at the opposite end. 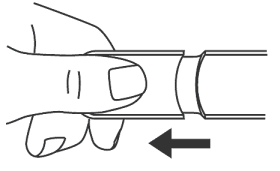 2. Place Emerade against the outer side of the thigh at a 90° angle and press firmly so that the needle cover is depressed. A click can be heard when the device has activated and the needle has penetrated the thigh.

3. Hold Emerade against the thigh for about 5 seconds. Lightly massage the injection site afterwards.

The needle in Emerade is protected before, during and after the injection.

When the injection is completed, the needle cover of the Emerade pen is visibly longer and the plunger is visible in the inspection window by lifting the label.

After using of Emerade pen following the instructions, the patient can verify if the pen is activated. Pictures below (Fig.1-Fig.2) apply to all doses of Emerade (150 micrograms, 300 micrograms and 500 micrograms).

The unused Emerade pen (before activation) has needle cover in its normal position (Fig. 1).

Emerade pen that has been activated, will have an extended needle cover (Fig. 2).

If the needle cover has not extended, the pen has not activated.

An Emerade pen that has activated, and has successfully delivered a dose of adrenaline, will show a coloured plunger in the inspection window (revealed by peeling back the label on the pen):

If an Emerade adrenaline pen fails to activate immediately, an additional attempt should be made using an increased force when pressing the pen against the intended injection site. If not successful proceed to immediately to use your second pen.

Sometimes a single dose of adrenaline may not be sufficient to completely reverse the effects of a serious allergic reaction. For this reason, your doctor is likely to prescribe two Emerade pens for you. If your symptoms have not improved or have deteriorated within 5-15 minutes after the first injection, either you or the person with you should give a second injection. For this reason you should carry two Emerade pens with you at all times.

Emerade is intended only for emergency treatment. You must always contact your doctor or go to the nearest hospital for further treatment. Inform your doctor that you have taken an injection of adrenaline. Take the used auto-injector with you.

See Section 4.2 for instructions to be conveyed to the patient/carer regarding actions to be taken following each use of Emerade.

Do not remove the cap unless injection is required.

Instructions for use are shown on the label, package and package leaflet.

Autoinjectors without needles are available for training purposes.