Detrunorm XL 30 mg Modified Release Capsules are indicated in adults for the symptomatic treatment of urinary incontinence and/or increased urinary frequency and urgency in patients with overactive bladder syndrome.

The recommended daily doses are as follows:

Adults: As a standard dose one capsule (= 30 mg propiverinehydrochloride) once a day is recommended.

The safety and efficacy of propiverine in children has not yet been established. Hence this product should not be used in children.

Generally there is no special dose regimen for the elderly (see section 5.2).

Caution should be exercised and physicians should monitor patients carefully for side effects in the following dispositions (see sections 4.4, 4.5, 5.2) .

Use in renal impairment

In patients with mild or moderate impairment of renal function no dose adjustment is required. (see section 5.2).

Use in hepatic impairment

In patients receiving drugs that are potent flavin-containing monooxygenase (FMO) inhibitors such as methimazole in combination with potent CYP 3A4/5 inhibitors treatment should start with a dose of 15 mg per day. The dose may thereafter be titrated to a higher dose. However, caution should be exercised and physicians should monitor these patients carefully for side effects (see sections 4.5, 5.2).

Intake of propiverine in relation to food

There is no clinically relevant effect of food on the pharmacokinetics of propiverine (see section 5.2). Accordingly, there is no particular recommendation for the intake of propiverine in relation to food.

Capsules for oral use.

Do not crush or chew the capsules.

Detrunorm XL 30 mg Modified Release Capsules are contraindicated in patients with the following:

- Hypersensitivity to the active substance or to any of the excipients listed in section 6.1.

- Obstruction of the bowel

The drug should be used with caution in patients suffering from:

Symptoms of the following diseases may be aggravated following administration of the drug:

Propiverine, like other anticholinergics, induces mydriasis. Therefore, the risk to induce acute angle-closure glaucoma in individuals predisposed with narrow angles of the anterior chamber may be increased.

Drugs of this class including propiverine have been reported to induce or precipitate acute angle-closure glaucoma.

Pollakiuria and nocturia due to renal disease or congestive heart failure as well as organic bladder diseases (e.g. urinary tract infections, malignancy) should be ruled out prior to treatment.

Patients with rare hereditary problems of galactose intolerance, the total lactase deficiency or glucose-galactose malabsorption should not take this medicine

- Decreased effects due to concomitant medication with cholinergic drugs.

- The effect of prokinetics such as metoclopramide may be decreased.

- Pharmacokinetic interactions are possible with other drugs metabolised by cytochrome P450 3A4 (CYP 3A4). However, a very pronounced increase of concentrations for such drugs is not expected as the effects of propiverine are small compared to classical enzyme inhibitors (e.g. ketoconazole or grapefruit juice). Propiverine may be considered as weak inhibitor of cytochrome P450 3A4. Pharmacokinetic studies with patients concomitantly receiving potent CYP 3A4 inhibitors such as azole antifungals (e.g. ketoconazole, itraconazole) or macrolide antibiotics (e.g. erythromycin, clarithromycin) have not been performed.

- Patients receiving concomitant treatment with drugs that are potent inhibitors of CYP 3A4 combined with methimazole:

In patients receiving drugs that are potent flavin-containing monooxygenase (FMO) inhibitors such as methimazole in combination with potent CYP 3A4/5 inhibitors treatment should start with a dose of 15 mg per day. The dose may thereafter be titrated to a higher dose. However, caution should be exercised and physicians should monitor these patients carefully for side effects (see sections 4.2, 5.2).

There are no data from the use of propiverine in pregnant women.. Studies in animals have shown reproductive toxicity. Propiverine is not recommended during pregnancy (see section 5.3). .

There are no human data on the effect of propiverine on fertility.

Animal studies do not indicate direct or indirect harmful effects with respect to fertility (see section 5.3)

No studies on the effects on the ability to drive and use machines have been performed.

Propiverine hydrochloride may produce drowsiness and blurred vision. This may impair the patient's ability to exert activities that require mental alertness such as operating a motor vehicle or other machinery, or to exert hazardous work while taking this drug.

Sedative drugs may enhance the drowsiness caused by propiverinehydrochloride.

Within each system organ class, the undesirable effects are ranked under heading of frequency using the following convention:

Not known (cannot be estimated from the available data).

All undesirable effects are transient and recede after a dose reduction or termination of the therapy after maximum 1-4 days.

During long-term therapy hepatic enzymes should be monitored, because reversible changes of liver enzymes might occur in rare cases.

Reporting suspected adverse reactions after authorisation of the medicinal product is important. It allows continued monitoring of the benefit/risk balance of the medicinal product. Healthcare professionals are asked to report any suspected adverse reactions via the Yellow Card Scheme, website: www.mhra.gov.uk/yellowcard or search for MHRA Yellow Card in the Google Play or Apple App Store.

Overdose with the muscarinic receptor antagonist propiverine can potentially result in severe anticholinergic effects. Peripheral and central nervous system disturbances may occur, such as:

- bradycardia, possibly leading to tachycardia in the further course

- In the event of overdose with propiverine the patient should be treated with activated charcoal suspension with plenty amount of water.

- Gastric lavage should only be taken into consideration with protective intubation, use of an oiled tube (dryness of mucosa) and if performed within 1 hour after ingestion of propiverine. Vomiting must not be induced.

Followed by symptomatic and supportive treatment in case of severe central anticholinergic effects such as hallucinations or pronounced excitation, antidote treatment for atropine overdose (e.g. physostigmine) with a dosage of 1.0 to 2.0 mg in adults by slow intravenous injection (may be repeated as necessary to a total of 5 mg) can be attempted.

- Forced diuresis or hemodialysis is not effective to enhance the renal elimination.

- In case of severe central anticholinergic effects such as hallucinations or pronounced excitation antidote treatment with physostigmine can be attempted.

- Mydriasis: treatment with pilocarpine eye drops and/or darkening of the patient's room

Inhibition of the efferent connection of the nervus pelvicus due to anticholinergic action.

In animal models propiverine hydrochloridecauses a dose-dependent decrease of the intravesical pressure and an increase in bladder capacity.

The effect is based on the sum of the pharmacological properties of propiverine and three active urinary metabolites as shown in isolated detrusor strips of human and animal origin.

General characteristics of the active substance

Propiverine is nearly completely absorbed from the gastrointestinal tract. It undergoes extensive first pass metabolism. Effects on urinary bladder smooth muscle cells are due to the parent compound and three active metabolites as well, which are rapidly excreted into the urine.

Food does not influence the pharmacokinetics of propiverine.

The bioavailability of propiverine after the meal was 99% compared to the fasting conditions.

Administration of the ER capsule leads to mean Cmax – concentrations of propiverine of about 70 ng/ml reached within 9.5 hours after administration. The Cmax values for the main metabolite propiverine-N-oxide were slightly increased by food (f= 1.26), whereas the extent of absorption was unchanged. Propiverine-N-oxide showed for all pharmacokinetic parameters 90 % confidence intervals within the acceptance ranges.

An adjustment of dose in relation to food intake is not required.

The volume of distribution was estimated in 21 healthy volunteers after intravenous administration of propiverine hydrochloride to range from 125 to 473 l (mean 279 l) indicating that a large amount of available propiverine is distributed to peripheral compartments. The binding to plasma proteins is 90 - 95 % for the parent compound and about 60 % for the main metabolite. 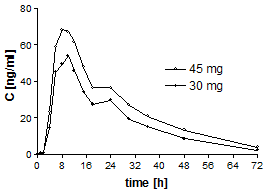 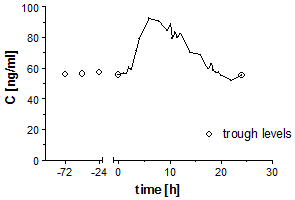 Propiverine is extensively metabolised by intestinal and hepatic enzymes. The primary metabolic route involves the oxidation of the piperidyl-N and is mediated by CYP 3A4 and flavin-containing-monoxygenases (FMO) 1 and 3 and leads to the formation of the much less active N-oxide, the plasma concentration of which greatly exceeds that of the parent substance. Four metabolites were identified in urine; three of them are pharmacologically active and may contribute to the therapeutic efficacy.

In vitro there is a slight inhibition of CYP 3A4 and CYP 2D6 detectable which occurs at concentrations exceeding therapeutic plasma concentrations 10- to 100-fold (see section 4.5).

Following administration of 30 mg oral dose of 14C-propiverine hydrochloride to healthy volunteers, 60 % of radioactivity was recovered in urine and 21 % was recovered in faeces within 12 days. Less than 1% of an oral dose is excreted unchanged in the urine. Mean total clearance after single dose administration of 30 mg is 371 ml/min (191 – 870 ml/min).

Correlation between the oral dose of extended release propiverine and the resulting AUC0-∞: 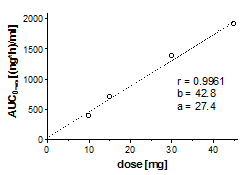 Correlation between the oral dose of extended release propiverine and the resulting Cmax: 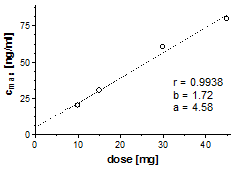 Severe renal impairment does not significantly alter the disposition of propiverine and its main metabolite, propiverine-N-oxide, as deduced from a single dose study in 12 patients with creatinine clearance < 30 ml/min. No dose adjustment is to be recommended.

There were similar steady state pharmacokinetics in 12 patients with mild to moderate impairment of liver function due to fatty liver disease as compared to 12 healthy controls. No data are available for severe hepatic impairment.

The comparison of trough plasma concentrations during steady state reveals no difference between elderly (60 – 85 years; mean 68) and young healthy subjects. The ratio of parent drug to metabolite remains unchanged in elderlyindicating the metabolic conversion of propiverine to its main metabolite, propiverine-N-oxide, not to be an age-related or limiting step in the overall excretion. As bioequivalence of Detrunorm 15 mg Coated Tablets three times daily and propiverine hydrochloride modified release capsules 45 mg once daily was established in a GCP compliant study the same can be concluded for Detrunorm XL 30 mg Modified Release Capsules.

In long term oral dose studies in two mammalian species the main treatment related effect were changes in the liver (including elevation of hepatic enzymes). These were characterised by hepatic hypertrophy and fatty degeneration. The fatty degeneration was reversible upon cessation of treatment.

In animal studies, skeletal retardation in the offspring occurred when the drug was administered orally at high doses to pregnant females. In lactating mammals propiverine hydrochloride was excreted into the milk.

There was no evidence of mutagenicity. The carcinogenicity study in mice demonstrated an increased incidence of hepatocellular adenoma and carcinoma in high dose males. In the rat carcinogenicity study hepatocellular adenoma, kidney adenoma and urinary bladder papilloma has been demonstrated in high dose male rats, while in female animals endometrial stromal polyps were increased at the high dose levels. Both the rat and mouse tumours were considered to be species specific and therefore not of clinical relevance.

No effects on male and female fertility and reproduction behaviour were observed in toxicological studies with rats.

Store in the original package to protect from moisture.