Implant in a pre-filled syringe

Staladex is used in men for the following indications:

For the treatment of hormone-dependent, advanced prostate cancer.

For the treatment of high risk, localized and locally advanced, hormone-dependent prostate cancer in combination with radiotherapy.

Administer one implant once every three months.

Staladex is injected subcutaneously under the abdominal skin.

Animal study findings (thrombosis of small vessels distal to the administration site) indicate that accidental intra-arterial injection must be avoided.

Response to Leuprorelin therapy should be monitored by clinical parameters and by measuring prostate-specific antigen (PSA) serum levels. Clinical studies with leuprorelin acetate have shown that testosterone levels increased during the first 4 days of treatment in the majority of non-orchidectomised patients. They then decreased and reached castrate levels by 2-4 weeks. Once attained, castrate levels were maintained as long as drug therapy continued. If a patient's response appears to be sub-optimal, then it would be advisable to confirm that serum testosterone levels have reached or are remaining at castrate levels.

Treatment of prostate cancer patients with a gonadotropin releasing hormone (GnRH) analogue can be continued even after castration resistance has developed, ensuring compliance with relevant guidelines.

Treatment of advanced, hormone-dependent prostate cancer with Leuprorelin is usually a long-term treatment.

• Hypersensitivity to leuprorelin or other GnRH analogues, to polylactic acid or to any of the implant excipients listed in section 6.1.

• As the sole treatment in prostate cancer patients with spinal cord compression or evidence of spinal metastases.

• In women or paediatric patients.

As with other GnRH agonists, Leuprorelin causes a transient increase in serum concentrations of testosterone, dihydrotestosterone and acid phosphatase during the first week of treatment. Patients may experience worsening of symptoms or onset of new symptoms, including bone pain, neuropathy, haematuria, or ureteral or bladder outlet obstruction (see section 4.8). These symptoms usually subside on continuation of therapy.

Additional administration of an appropriate anti-androgen should be considered beginning 3 days prior to leuprorelin therapy and continuing for the first two to three weeks of treatment. This has been reported to prevent the sequelae of an initial rise in serum testosterone.

Following surgical castration, Leuprorelin does not lead to a further decrease in serum testosterone levels in male patients.

Therapeutic success should be monitored regularly (but particularly if there is evidence of progression despite appropriate treatment) by means of clinical examinations (digital rectal examination of the prostate, ultrasound, skeletal scintigraphy, computed tomography) and by checking phosphatases and/or PSA and serum testosterone.

Patients with vertebral and/or brain metastases as well as patients with urinary tract obstruction should be closely monitored during the first few weeks of therapy.

Patients with hypertension should be carefully monitored.

Decreased bone density has been reported in the medical literature in men who have had orchiectomy or who have been treated with GnRH agonists (see section 4.8).

Apart from long lasting testosterone deficiency, increased age, smoking and consumption of alcoholic beverages, obesity and insufficient exercise may have an influence on the development of osteoporosis.

During post-marketing surveillance, rare cases of pituitary apoplexy (a clinical syndrome secondary to infarction of the pituitary gland) have been reported after the administration of GnRH-agonists, with a majority occurring within 2 weeks of the first dose, and some within the first hour. In these cases, pituitary apoplexy was presented as sudden headache, vomiting, visual changes, ophthalmoplegia, altered mental status, and sometimes cardiovascular collapse. Immediate medical attention is required.

There is an increased risk of incident depression (which may be serious) in patients undergoing treatment with GnRH agonists, such as leuprorelin. Patients should be informed of this risk and treated as appropriate if symptoms occur.

There have been post-marketing reports of convulsions observed in patients treated with leuprorelin acetate and these events have been reported in both children and adults with or without a history of epilepsy, seizure disorders or risk factors for seizures.

The use of Leuprorelin can produce positive results in doping tests.

In patients with a history of or risk factors for QT interval prolongation and in patients receiving concomitant medicinal products known to prolong the QT interval (see section 4.5) physicians should carefully assess the benefit/risk ratio including the potential for developing torsade de pointes prior to initiating therapy with Staladex.

Hepatic dysfunction and jaundice with elevated liver enzyme levels have been reported with the use of leuprorelin acetate. Therefore, close observation should be made and appropriate measures taken if necessary.

No pharmacokinetic drug-drug interaction studies have been performed with Staladex. There have been no reports of any interactions of leuprorelin acetate with other medicinal products

Staladex is not indicated for use in women and is generally contraindicated during pregnancy and lactation.

Fatigue is common, particularly during initiation of therapy, and may also be due to the underlying malignancy.

Initially, patients typically experience a brief increase in serum testosterone levels, which may temporarily worsen some of the symptoms of disease (development of or increase in bone pain, urinary obstruction and its consequences, spinal cord compression, muscle weakness in the legs, lymphoedema). This increase in symptoms usually subsides spontaneously without discontinuation of Staladex.

The response to Leuprorelin therapy should be monitored by measuring serum concentrations of testosterone 28 days after each injection carried out and before each re-administration of Staladex and additionally on the basis of other laboratory tests like acid phosphatase and PSA. For example, testosterone levels show an initial surge upon initiation of therapy, only to decrease thereafter over a period of two weeks.

After two to four weeks, testosterone concentrations reach levels similar to those observed following bilateral orchiectomy and remain at that level throughout the treatment period.

Reporting suspected adverse reactions after authorisation of the medicinal product is important. It allows continued monitoring of the benefit/risk balance of the medicinal product. Healthcare professionals are asked to report any suspected adverse reactions via the Yellow Card Scheme at www.mhra.gov.uk/yellowcard or search for MHRA Yellow Card in the Google Play or Apple App Store.

No symptoms of intoxication have been observed to date.

Even when administering doses of up to 20 mg leuprorelin acetate per day for two years ( the dose levels used in early clinical studies), no other or new adverse reactions differing from those seen after daily administration of 1 mg or three-monthly administration of 11.25 mg were observed.

Leuprorelin acetate, the active substance of Staladex, is a synthetic analogue of the naturally occurring hypothalamic releasing factor GnRH, which controls the release of the gonadotropic hormones LH (luteinising hormone) and FSH (follicle- stimulating hormone) from the anterior lobe of the pituitary gland. These hormones in turn stimulate gonadal steroid synthesis.

Unlike physiological GnRH, which is released in a pulsatile manner from the hypothalamus, leuprorelin acetate – also known as GnRH agonist – blocks pituitary GnRH receptors continuously during long-term therapeutic use and, after initial short- term stimulation, causes their desensitisation (down regulation).

As a result, there is reversible pituitary suppression of gonadotropin release with a subsequent drop in testosterone concentrations in men, which in turn influences the growth of carcinomatous prostate tissue which is normally stimulated by dihydrotestosterone, formed by the reduction of testosterone in prostate cells.

Continuous administration of leuprorelin acetate leads to a decrease in the number and/or sensitivity (down regulation) of pituitary receptors and consequently to a decrease in LH, FSH and DHT levels. This causes testosterone concentrations to be reduced to castration levels.

An anti-androgenic effect and growth inhibition of prostatic carcinomas have also been demonstrated in animal studies.

Experimental and clinical studies have shown that three-monthly treatment with leuprorelin acetate inhibits the release of gonadotropin after initial stimulation.

In men, subcutaneous administration of leuprorelin acetate causes an initial increase in LH and FSH, characterised by a transient increase in testosterone and dihydrotestosterone levels.

In isolated cases, an associated short-term symptomatic aggravation of the disease has been observed in the first three weeks; consideration should therefore be given to adjuvant anti-androgen therapy in men with prostate cancer.

In contrast, long-term treatment with leuprorelin acetate causes a decrease in LH and FSH concentrations in all patients; in men, androgen concentrations similar to those seen following bilateral orchiectomy are reached. These changes usually appear two to three weeks after the start of therapy and are maintained throughout the treatment period. This is also the reason why leuprorelin acetate can be used to test the hormone sensitivity of prostate cancer and the potential therapeutic value of orchiectomy.

Following injection of the implant, the active substance, leuprorelin acetate, is released continuously over a period of 3 months. The polymers are absorbed like surgical suture material. 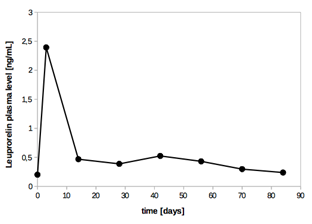 The volume of distribution of leuprorelin in men is 36 l, and total clearance is 139.6 ml/min (determined when using leuprorelin acetate as a depot formulation).

Leuprorelin levels in patients with renal and/or hepatic impairment were similar to those measured in patients with normal kidney and/or liver function. Some patients with chronic kidney disease showed higher leuprorelin serum levels. However, this observation appears to have no clinical significance.

The relative bioavailability after 84 days for Staladex is 84.6 %, calculated based on comparison with the AUC of an intravenous injection of 1 mg leuprorelin acetate.

The acute toxicity of the depot formulation was studied in male and female mice and rats by four routes (IP, IM, SC, PO). No deaths were observed up to doses of 2,000 or 5,000 mg leuprorelin acetate.

All dose levels (the lowest dose tested was 0.8 mg leuprorelin acetate/kg body weight per month) were associated with local skin lesions at the injection site and atrophic changes in the reproductive organs. Rats showed vacuoles in liver cells and in renal tubular epithelial cells at all dose levels. The observed reproductive organ changes are explained by the endocrinological effect of the substance.

Two-year carcinogenicity studies were carried out in rats and mice. Rats showed a dose- related increase in pituitary adenomas. These findings were seen in rats after daily subcutaneous dosing with doses ranging from 0.6 to 4 mg for 24 months. Mice developed no pituitary adenomas at a dose of 60 mg/kg/day for two years.

In vitro and in vivo assays of leuprorelin acetate performed to detect gene and chromosomal mutations produced no evidence of a mutagenic potential.

Clinical and pharmacological studies in men have shown that suppression of fertility was fully reversible within not more than 24 weeks after discontinuation of continuous dosing with leuprorelin acetate.

Studies in rats and rabbits have produced no evidence of teratogenic potential. Embryotoxic/embryolethal effects were observed in rabbits at doses greater than 0.24 μg/kg.

The pre-filled syringe must be used immediately after opening the sterile pouch.

Do not store above 30°C. Store the pre-filled syringe in the unopened original package.