Skyrizi is indicated for the treatment of moderate to severe plaque psoriasis in adults who are candidates for systemic therapy.

Skyrizi is intended for use under the guidance and supervision of a physician experienced in the diagnosis and treatment of psoriasis.

The recommended dose is 150 mg (two 75 mg injections) administered by subcutaneous injection at week 0, week 4, and every 12 weeks thereafter.

Consideration should be given to discontinuing treatment in patients who have shown no response after 16 weeks of treatment. Some patients with initial partial response may subsequently improve with continued treatment beyond 16 weeks.

If a dose is missed, the dose should be administered as soon as possible. Thereafter, dosing should be resumed at the regular scheduled time.

Elderly (aged 65 years and over)

There is limited information in subjects aged ≥65 years.

The safety and efficacy of Skyrizi in children and adolescents aged 6 to 18 years have not yet been established. No data are available.

There is no relevant use of Skyrizi in children aged below 6 years for the indication of moderate to severe plaque psoriasis.

Skyrizi is administered by subcutaneous injection. For each dose, the injections should be administered at different anatomic locations (such as thighs or abdomen), and not into areas where the skin is tender, bruised, erythematous, indurated or affected by psoriasis. Administration of Skyrizi in the upper, outer arm may only be performed by a healthcare professional or caregiver.

Patients may self-inject Skyrizi after training in subcutaneous injection technique. Patients should be instructed to inject 2 pre-filled syringes for the full 150 mg dose and to read the 'Instructions for use' provided in the package leaflet before administration.

In order to improve the traceability of biological medicinal products, the name and the batch number of the administered product should be clearly recorded.

Risankizumab may increase the risk of infection.

If a serious hypersensivity reaction occurs, administration of risankizumab should be discontinued immediately and appropriate therapy initiated.

Risankizumab is not expected to undergo metabolism by hepatic enzymes or renal elimination. Drug interactions between risankizumab and inhibitors, inducers, or substrates of drug metabolising enzymes are not expected and no dose adjustment is needed (see section 5.2).

The safety and efficacy of risankizumab in combination with immunosuppressants, including biologics, or phototherapy have not been evaluated.

Women of childbearing potential should use an effective method of contraception during treatment and for at least 21 weeks after treatment.

It is unknown whether risankizumab is excreted in human milk. Human IgGs are known to be excreted in breast milk during the first few days after birth, which decreases to low concentrations soon afterwards; consequently, a risk to the breast-fed infant cannot be excluded during this short period. A decision should be made whether to discontinue/abstain from risankizumab therapy, taking into account the benefit of breast-feeding to the child and the benefit of risankizumab therapy to the woman.

The effect of risankizumab on human fertility has not been evaluated. Animal studies do not indicate direct or indirect harmful effects with respect to fertility.

Risankizumab has no or negligible influence on the ability to drive and use machines.

The most frequently reported adverse reactions were upper respiratory infections, which occurred in 13% of patients.

Over the entire psoriasis programme including long-term exposure to risankizumab, the rate of infections was 75.5 events per 100 subject-years. The majority of cases were non-serious and mild to moderate in severity and did not lead to discontinuation of risankizumab. The rate of serious infections was 1.7 events per 100 subject-years (see section 4.4).

As with all therapeutic proteins, there is the potential for immunogenicity with risankizumab. The detection of antibody formation is highly dependent on the sensitivity and specificity of the assay.

For subjects treated with risankizumab at the recommended clinical dose for up to 52 weeks in psoriasis clinical trials, treatment-emergent anti-drug antibodies and neutralising antibodies were detected in 24% (263/1,079) and 14% (150/1,079) of evaluated subjects, respectively.

For most subjects, antibodies to risankizumab including neutralising antibodies were not associated with changes in clinical response or safety. Among the few subjects (approximately 1%; 7/1,000 at week 16 and 6/598 at week 52) with high antibody titers (>128), clinical response appeared to be reduced. The incidence of injection site reactions is numerically higher in the anti-drug antibody-positive compared with anti-drug antibody-negative groups over short-term (16 weeks: 2.7% vs 1.3%) and longer term treatment (>52 weeks: 5.0% vs 3.3%). The injection site reactions were all mild to moderate in severity, none were serious, and none led to discontinuation of risankizumab.

There is limited safety information in subjects aged ≥65 years.

Website: www.mhra.gov.uk/yellowcard or search for MHRA Yellow Card in the Google Play or Apple App Store

In the event of overdose, it is recommended that the patient be monitored for any signs or symptoms of adverse reactions and appropriate symptomatic treatment be instituted immediately.

Risankizumab is a humanised immunoglobulin G1 (IgG1) monoclonal antibody that selectively binds with high affinity to the p19 subunit of human interleukin 23 (IL-23) cytokine without binding to IL-12 and inhibits its interaction with the IL-23 receptor complex. IL-23 is a cytokine that is involved in inflammatory and immune responses. By blocking IL-23 from binding to its receptor, risankizumab inhibits IL-23-dependent cell signalling and release of proinflammatory cytokines.

In a study of subjects with psoriasis, expression of genes associated with the IL-23/IL-17 axis was decreased in the skin after single doses of risankizumab. Reductions in epidermal thickness, infiltration of inflammatory cells, and expression of psoriatic disease markers were also observed in psoriatic lesions.

The efficacy and safety of risankizumab was assessed in 2,109 subjects with moderate to severe plaque psoriasis in four multicentre, randomised, double-blind studies (ULTIMMA-1, ULTIMMA-2, IMMHANCE, and IMMVENT). Enrolled subjects were 18 years of age and older with plaque psoriasis who had a body surface area (BSA) involvement of ≥10%, a static Physician Global Assessment (sPGA) score of ≥3 in the overall assessment (plaque thickness/induration, erythema, and scaling) of psoriasis on a severity scale of 0 to 4, a Psoriasis Area and Severity Index (PASI) score ≥12, and who were candidates for systemic therapy or phototherapy.

ULTIMMA-1 and ULTIMMA-2 enrolled 997 subjects (598 randomised to risankizumab 150 mg, 199 to ustekinumab 45 mg or 90 mg [according to baseline weight], and 200 to placebo). Subjects received treatment at week 0, week 4, and every 12 weeks thereafter. The two co-primary endpoints in ULTIMMA-1 and ULTIMMA-2 were the proportion of subjects who achieved 1) PASI 90 response and 2) sPGA score of clear or almost clear (sPGA 0 or 1) at week 16 versus placebo. The results for the co-primary and other endpoints are presented in Table 2 and Figure 1.

Table 2: Efficacy and quality of life results in adults with plaque psoriasis in ULTIMMA-1 and ULTIMMA-2

Figure 1: Time course of mean percent change from baseline of PASI in ULTIMMA-1 and ULTIMMA-2 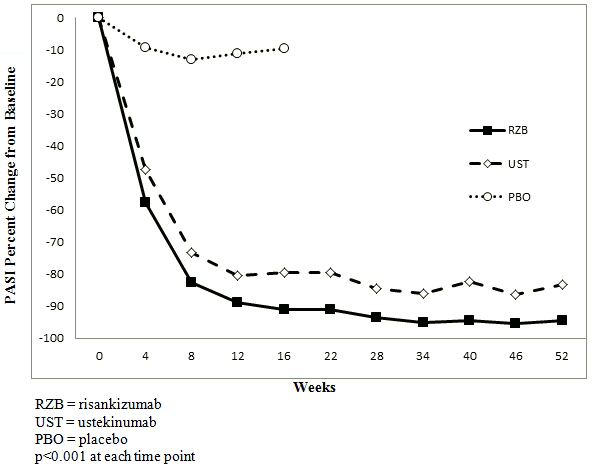 Improvements were observed in psoriasis involving the scalp, the nails, and the palms and soles at week 16 and week 52 in subjects treated with risankizumab.

Table 3: Mean changes from baseline in NAPSI, PPASI, and PSSI

Anxiety and depression, as measured by the Hospital Anxiety and Depression Scale (HADS), improved in the risankizumab group at week 16 compared with the placebo group.

The safety profile of risankizumab with up to 77 weeks of exposure was consistent with the profile observed up to 16 weeks.

Of the 31 subjects from the IMMHANCE study with latent tuberculosis (TB) who did not receive prophylaxis during the study, none developed active TB during the mean follow-up of 55 weeks on risankizumab.

• <PASI 50 were switched to risankizumab

Results are presented in Table 4.

Table 4: Efficacy and quality of life results at week 16 in adults with plaque psoriasis in IMMVENT

For subjects who had PASI 50 to <PASI 90 with adalimumab at week 16 and were re-randomised, differences in PASI 90 response rates between switching to risankizumab and continuing adalimumab were noted 4 weeks after re-randomisation (49.1% vs 26.8%, respectively).

Results 28 weeks after re-randomisation are presented in Table 5 and Figure 2. 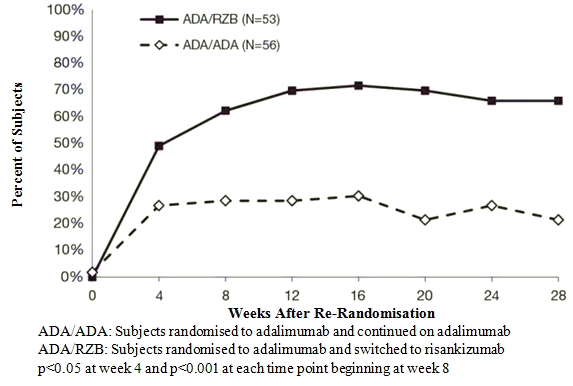 The European Medicines Agency has deferred the obligation to submit the results of studies with risankizumab in one or more subsets of the paediatric population in the treatment of plaque psoriasis (see section 4.2 for information on paediatric use).

Therapeutic IgG monoclonal antibodies are typically degraded into small peptides and amino acids via catabolic pathways in the same manner as endogenous IgGs. Risankizumab is not expected to be metabolised by cytochrome P450 enzymes.

As an IgG1 monoclonal antibody, risankizumab is not expected to be filtered by glomerular filtration in the kidneys or to be excreted as an intact molecule in the urine.

Risankizumab exhibited linear pharmacokinetics with approximately dose-proportional increases in systemic exposure (Cmax and AUC) in the evaluated dose ranges of 18 to 300 mg or 0.25 to 1 mg/kg subcutaneous administration in healthy subjects or subjects with psoriasis.

Population pharmacokinetic analyses indicated that risankizumab exposure was not impacted by concomitant medications (metformin, atorvastatin, lisinopril, amlodipine, ibuprofen, acetylsalicylate and levothyroxine) used by some subjects with plaque psoriasis during the clinical studies.

The pharmacokinetics of risankizumab in paediatric subjects has not been established.

Patients with renal or hepatic impairment

As an IgG1 monoclonal antibody, risankizumab is mainly eliminated via intracellular catabolism and is not expected to undergo metabolism via hepatic cytochrome P450 enzymes or renal elimination.

Risankizumab clearance and volume of distribution increase as body weight increases which may result in reduced efficacy in subjects with high body weight (>130 kg). However, this observation is based on a limited number of subjects. No dose adjustment based on body weight is currently recommended.

The clearance of risankizumab was not significantly influenced by gender or race in adult subjects with plaque psoriasis. No clinically meaningful differences in risankizumab exposure were observed in Chinese or Japanese subjects compared to Caucasian subjects in a clinical pharmacokinetic study.

Nonclinical data revealed no special hazard for humans based on repeat-dose toxicity studies including safety pharmacology evaluations, and a reproductive and developmental toxicity study in cynomolgus monkeys at doses of up to 50 mg/kg/week (producing exposures of about 70 times the clinical exposure at maximum recommended human dose [MRHD]).

Mutagenicity and carcinogenicity studies have not been conducted with risankizumab. In a 26-week chronic toxicology study in cynomolgus monkeys at doses of up to 50 mg/kg/week (about 70 times the clinical exposure at the MRHD), there were no pre-neoplastic or neoplastic lesions observed and no adverse immunotoxicity or cardiovascular effects were noted .

Keep the pre-filled syringes in the outer carton in order to protect from light.

Before injecting, patients may remove the carton from the refrigerator and allow to reach room temperature out of direct sunlight (15 to 30 minutes) without removing the pre-filled syringes from the carton.

Prior to use, a visual inspection of each pre-filled syringe is recommended. The solution should be colourless to slightly yellow and clear to slightly opalescent. It may contain a few translucent to white product-related particles. Skyrizi should not be used if the solution is cloudy or discoloured, or contains large particles.

Two pre-filled syringes should be injected for the full 150 mg dose. Comprehensive instructions for use are provided in the package leaflet.

Each pre-filled syringe is for single use only.

Out of Hours Telephone