Lokelma is indicated for the treatment of hyperkalaemia in adult patients (see section 4.4 and 5.1).

Adults, including the elderly

The recommended starting dose of Lokelma is 10 g, administered three times a day orally as a suspension in water. When normokalaemia is achieved, the maintenance regimen should be followed (see below).

When normokalaemia has been achieved, the minimal effective dose of Lokelma to prevent recurrence of hyperkalaemia should be established. A starting dose of 5 g once daily is recommended, with possible titration up to 10 g once daily, or down to 5 g once every other day, as needed, to maintain a normal potassium level. No more than 10 g once daily should be used for maintenance therapy.

Serum potassium levels should be monitored regularly during treatment. Monitoring frequency will depend upon a variety of factors including other medications, progression of chronic kidney disease and dietary potassium intake.

If severe hypokalaemia should occur, Lokelma should be discontinued and the patient re-evaluated.

If a patient misses a dose they should be instructed to take the next usual dose at their normal time.

No changes from the normal doses are required for patients with renal or hepatic impairment.

The safety and efficacy of Lokelma in children and adolescents (< 18 years) have not been established. No data are available.

The entire contents of the sachet should be emptied in a drinking glass containing approximately 45 ml of water and stirred well. The powder will not dissolve. The tasteless liquid should be drunk while still cloudy. If the powder settles, the water should be stirred again. It should be ensured that all of the content is taken.

The suspension can be taken with or without food.

Hypersensitivity to the active substance.

Serum potassium should be monitored when clinically indicated, including after changes are made to medicinal products that affect the serum potassium concentration (e.g. renin-angiotensin-aldosterone system (RAAS) inhibitors or diuretics) and after the Lokelma dose is titrated.

Hypokalaemia may be observed (see section 4.8). Dose titration as described under maintenance posology may be required in such cases to prevent moderate to severe hypokalaemia. In patients with severe hypokalaemia, Lokelma should be discontinued and the patient re-evaluated.

During correction of hyperkalaemia, a lengthening of the QT interval can be observed as the physiologic result of a decline in serum potassium concentration.

The risk of interaction with X-rays

Sodium zirconium cyclosilicate may be opaque to X-rays. If the patient is having abdominal X-rays, radiographers should keep this in mind.

Limitations of the clinical data

Lokelma has not been studied in patients receiving dialysis treatment.

There is limited experience in patients with serum potassium concentrations greater than 6.5 mmol/L.

Clinical trials with Lokelma have not included exposure longer than one year.

Effect of other medicinal products on sodium zirconium cyclosilicate

Effect of sodium zirconium cyclosilicate on other medicinal products

Sodium zirconium cyclosilicate can be co-administered without spacing of dosing times with oral medications that do not exhibit pH-dependent bioavailability.

There are no data from the use of sodium zirconium cyclosilicate in pregnant women. Animal studies do not indicate direct or indirect harmful effects with respect to reproductive toxicity (see section 5.3). As a precautionary measure, it is preferable to avoid the use of Lokelma during pregnancy.

There were no adverse effects on embryo-foetal development in treated rats or in rabbits.

Lokelma has no or negligible influence on the ability to drive and use machines.

The most commonly reported adverse reactions were hypokalaemia (4.1%) and oedema related events (5.7%).

The safety profile of Lokelma was evaluated in clinical trials involving 1760 patients with 507 patients exposed for one year.

In clinical trials, 4.1% of Lokelma patients developed hypokalaemia with a serum potassium value less than 3.5 mmol/L, which was resolved with dose adjustment or discontinuation of Lokelma.

Oedema related events, including fluid overload, fluid retention, generalised oedema, hypervolaemia, localised oedema, oedema, oedema peripheral and peripheral swelling, were reported by 5.7% of Lokelma patients. The events were observed in the maintenance phase only and were more commonly seen in patients treated with 15 g. Up to 53% were managed by initiating a diuretic or adjusting a diuretic dose; the remainder did not require treatment.

In 2 clinical studies with open label exposure of Lokelma up to 1 year in 874 subjects, the following events were reported as related by investigators: gastrointestinal events [constipation (2.9%), diarrhoea (0.9%), abdominal pain/distension (0.5%), nausea (1.6%) and vomiting (0.5%)]; and hypersensitivity reactions [rash (0.3%) and pruritus (0.1%)]. These events were mild to moderate in nature, none were reported as serious and were generally resolved while the patient continued treatment. Due to the open label study design, a causal relationship between these events and Lokelma cannot be definitively established.

Reporting suspected adverse reactions after authorisation of the medicinal product is important. It allows continued monitoring of the benefit/risk balance of the medicinal product. Healthcare professionals are asked to report any suspected adverse reactions via the Yellow Card Scheme Website: www.mhra.gov.uk/yellowcard or search for MHRA Yellow Card in the Google Play or Apple App Store.

Overdose with sodium zirconium cyclosilicate could lead to hypokalaemia. Serum potassium should be checked and potassium supplemented as needed.

Pharmacotherapeutic group: Drugs for treatment of hyperkalaemia and hyperphosphatemia,

There were no studies conducted to investigate the pharmacodynamics when sodium zirconium cyclosilicate is administered with or without food.

Sodium zirconium cyclosilicate has also been shown to bind ammonium in vitro and in vivo, thereby removing ammonium and increasing serum bicarbonate levels. Lokelma-treated patients experienced an increase of 1.1 mmol/L at 5 g once daily, 2.3 mmol/L at 10 g once daily, and 2.6 mmol/L at 15 g once daily in bicarbonate compared with a mean increase of 0.6 mmol/L for those receiving placebo. In an environment where other factors affecting renin and aldosterone were not controlled, Lokelma demonstrated a dose-independent change in mean serum aldosterone levels (range: -30% to -31%) compared with the placebo group (+14%). No consistent effect on systolic and diastolic blood pressure has been observed.

The potassium-lowering effects of Lokelma have been demonstrated in three randomised, double-blind, placebo-controlled trials in patients with hyperkalaemia. All three studies tested the initial effect of Lokelma to correct hyperkalaemia during a 48-hour period and two studies also tested maintenance of normokalaemia effect obtained. The maintenance studies included patients with chronic kidney disease (58%), heart failure (10%), diabetes mellitus (62%) and RAAS inhibitor therapy (68%). In addition, two open-label maintenance studies tested long-term safety of Lokelma. These five studies included 1760 patients given doses of Lokelma; 507 exposed for at least 360 days. In the studies, Lokelma reduced serum potassium and maintained normal serum potassium levels regardless of the underlying cause of hyperkalaemia, age, sex, race, comorbid disease or concomitant use of RAAS inhibitors. No dietary restrictions were imposed; patients were instructed to continue their usual diet without any specified alterations.

A two-phase, placebo-controlled correction and maintenance use study

During the correction phase, patients were randomised to receive Lokelma (1.25 g, 2.5 g, 5 g or 10 g) or placebo, administered three times daily for the initial 48 hours (Table 2).

At the end of the maintenance period, when Lokelma was no longer administered, average potassium levels increased to near baseline levels.

A multi-phase, placebo-controlled maintenance study with an additional open-label phase

In the correction phase of the study, 258 patients with hyperkalaemia (baseline average 5.6, range 4.1 - 7.2 mmol/L) received 10 g of Lokelma administered three times daily for 48 hours. Reductions in potassium were observed 1 hour after the first 10 g dose of Lokelma. Median time to normokalaemia was 2.2 hours with 66% of patients achieving normokalaemia at 24 hours and 88% at 48 hours. Responses were larger in patients with more severe hyperkalaemia; serum potassium fell 0.8, 1.2 and 1.5 mmol/L in patients with baseline serum potassium < 5.5, 5.5-5.9 and ≥ 6 mmol/L, respectively.

Kaplan-Meier estimates of time to relapse for maintenance phase showed dose dependence in time to relapse with median time for 5 g dose ranging from 4 to 21 days depending on the baseline serum potassium values. Serum potassium should be monitored periodically and the Lokelma dose titrated as described in section 4.2 Posology and Method of Administration.

Figure 1 illustrates the mean serum potassium over the correction and maintenance phases of the study. 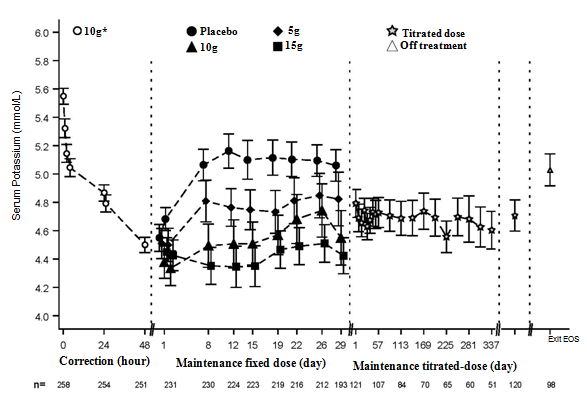 A study in chronic kidney disease patients with hyperkalaemia

This study was a double-blind placebo-controlled dose-escalating study in 90 patients (60 Lokelma patients; 30 controls) with baseline eGFR between 30-60 ml/min/1.73m2 and hyperkalaemia (baseline serum potassium 5.2 mmol/L, range 4.6 - 6 mmol/L). Patients were randomised to receive escalating doses of Lokelma (0.3 g, 3 g and 10 g) or placebo, administered three times a day with meals for two to four days. The primary endpoint was the rate of change in serum potassium from baseline throughout the initial 2 days of treatment. The trial met the primary efficacy endpoint at the 3 g and 10 g doses of Lokelma compared to placebo. Lokelma at the 10 g dose and the 3 g dose resulted in mean maximal reductions of 0.92 mmol/L and 0.43 mmol/L, respectively. Twenty-four hour urine collections showed that Lokelma decreased urinary potassium excretion from baseline by 15.8 mmol/24 h compared to placebo increase by 8.9 mmol/24 h (p < 0.001). Sodium excretion was unchanged relative to placebo (10 g, increase by 25.4 mmol/24 h compared to placebo increase by 36.9 mmol/24 h (NS)).

The long term (up to 12 months) effects of Lokelma were assessed in this study in 751 subjects with hyperkalaemia (baseline average 5.59 mmol/L; range 4.3-7.6 mmol/L). Comorbid conditions included chronic kidney disease (65%), diabetes mellitus (64%), heart failure (15%) and hypertension (83%). Use of diuretics and RAAS inhibitors was reported by 51 and 70% of subjects, respectively. During the correction phase, 10 g of Lokelma was administered three times daily for at least 24 hours and up to 72 hours. Subjects who achieved normokalaemia (3.5-5.0 mmol/L, inclusive) within 72 hours entered the maintenance phase of the study. All subjects in the maintenance phase received Lokelma at a starting dose of 5 g once daily which could be increased in increments of 5 g once daily (to a maximum of 15 g once daily) or decreased (to a minimum of 5 g once every other day) based upon the titration regimen.

Normokalaemia was achieved in 494/748 (66%), 563/748 (75%) and 583/748 (78%) of subjects after 24, 48 and 72 hours of correction phase dosing with an average reduction in serum potassium of 0.81 mmol/L, 1.02 mmol/L and 1.10 mmol/L at 24 (n=748), 48 (n=104) and 72 (n=28) hours, respectively. Normokalaemia was dependent on baseline potassium concentration, with subjects with the highest baseline serum potassium concentrations having the most prominent decrease after starting the study drug but with the lowest proportion of subjects achieving normokalaemia. One hundred and twenty-six patients had a baseline serum potassium ≥ 6.0 mmol/L (mean baseline potassium 6.28 mmol/L). These subjects had a mean reduction of 1.37 mmol/L at the end of the correction phase.

Note: One subject had a post-dose value that was more than 1 day after last dose. Therefore, the subject was eligible for the Correction Phase ITT Population; however, the time point was excluded from the analysis.

Figure 2 illustrates the mean serum potassium over the correction and maintenance phases of the study. 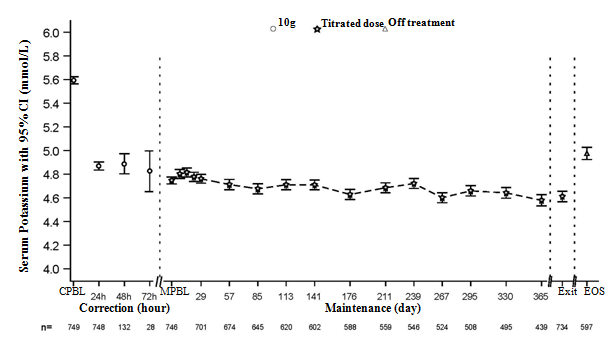 The European Medicines Agency has deferred the obligation to submit the results of studies with Lokelma in one or more subsets of the paediatric population in male and female children from birth to less than 18 years of age, with hyperkalaemia (see section 4.2 for information on paediatric use).

Sodium zirconium cyclosilicate is an inorganic, insoluble compound that is not subject to enzymatic metabolism. In addition, clinical studies have shown it not to be systemically absorbed. An in vivo mass balance study in rats showed that sodium zirconium cyclosilicate was recovered in the faeces with no evidence of systemic absorption. Due to these factors and its insolubility, no in vivo or in vitro studies have been performed to examine its effect on cytochrome P450 (CYP450) enzymes or transporter activity.

Sodium zirconium cyclosilicate is eliminated via the faeces.

Detailed information on this medicinal product is available on the website of the European Medicines Agency http://www.ema.europa.eu.